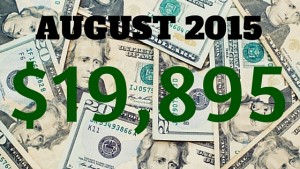 The biggest news for August that I can’t wait to share with you is the big increase in revenues.

As you can see, August was a record breaking month for my business. I brought in just shy of $20,000… but if you really want to get technical, it really should have been over $20,000, but there was an issue with my payment from Amazon for my kindle sales with my new bank account. So had the payment actually been transferred into my new bank account properly, I would have hit about $20,600.

But anyway, that doesn’t really matter in the grand scheme of things, the question you probably have is “How the heck did you more than triple your revenue from last month?”

To be more specific, I introduced a new version of my core product, and I launched it with a sale.

You see, I survey all the people who do not buy my product and ask them one question: “What was the main reason why you didn’t join my course?”

One of the top answers was consistently “It cost too much”, which makes sense since it’s a $497 product. So I decided to introduce a lower cost alternative for my audience. I just stripped away one feature from my core product (forums access) and lowered the price to $197.

The reason why I’m able to lower the price now, is because the forums access part of my product requires my attention (read: my time). So it’s not entirely scalable (yet), therefore with the exclusion of this feature from the new product, it meant that I can sell a large number of this new product without significant issues in the long run.

Now that was mostly attributed to the fact that I emailed about 16,000 people to let them know about this sale, and most of those people were already aware of me and my product. So I’m sure that also helped boost sales for those four days.

One other thing that I did, was that I made sure to inform people that the sale would end when I said it would end. There would be no exceptions to this rule and anyone who emailed me after the fact asking for any kind of “extension” to the sale, would be turned down. And I stuck to my guns on that, even after I had an additional 10 people beg me for an extension with every excuse in the book.

I made a point to stick to my word and show my audience that when I say something, I mean it!

The only other important thing to note about this recent success was that I had preceded the entire process by sending out a survey to my whole list informing them about the introduction of a new product. I let them know the reasoning behind why I was introducing a new product and asked them how much they think the new product would be worth.

This email served the purpose of establishing two things in their minds:

Surveys continue to prove their worth.

The only reason why I was able to identify the main reason behind why people weren’t purchasing my core product was because of the survey that automatically gets sent out to my audience.

Now, the complaint that the price of the product is too high is one that every entrepreneur will have, but I was absolutely sure of this because of my survey.

And armed with this information, I’ll also be able to do more to help my audience out. I have plans of introducing an affiliate program that will help even more of my audience out with the complaint that they can’t afford my product.

And I will also use a survey to help me further segment my email list in the future to help me understand what they’re struggling with the most and where they need the most help in their programming journey.

Now let’s get to the good stuff. The breakdown of my revenue for the month of August 2015.

So I hope that you’ll be able to gain some new insights into your business based on the August 2015 figures below:

Alright, so all in all it was a great month for sales and I also managed to keep my cashflow positive for the month by not spending all the revenues.

Once again the largest expense for my business was my own salary, but I’m happy to announce that I no longer need to save for my wedding! So moving forward, I should be able to reinvest more money into revenue generating expenses (like advertising).